Please don’t answer that because we can’t be friends if that’s the case.

To each their own.

Disclaimer – this author is not a licensed professional, so the following should be discussed with a registered dietitian if one is unsure whether or not they’ll be able to  change their diet.

So what’s the point?

Ya see, it’s difficult for those who suffer from CPTSD or dissociative disorders to ground themselves to the present because most of their time will be spent trying to determine whether or not they’re present to begin with!

Not to mention the fact that an emotional flashback will utterly disrupt anything in the present. Why? Because the body needs to release any and all pain in order to continue developing and growing.

Does that mean you’ll find elders growing like kiddies?

Nah, although one can always expand the awareness of their inner and outer worlds in order to understand where they fit in the grand scheme of life.

Once again this is difficult for those who struggle with past pains that more than likely have little to no imagery attached to them. Regardless, it’s problematic for any who suffer from them.

Buuuut there are effective ways to clean the body while preparing it to better recognize what belongs, as well as what needs to go so one can enjoy their life.

Now how can this be done?

Well to clean the body, one must eat clean!

Ya see, most of the food produced nowadays comes from factory farms.

Oh here we go (some of you might be thinking), another veg head trying to shame me for eating meat!

Well eating meat isn’t that bad when one compares it to the chemicals that lace the beef, poultry, and other animal-based products most of us consume regularly.

Is this author referring to growth hormones, antibiotics, and so on?

Well yes and no.

It’s your body, your temple, your choice.

Those chemicals can certainly alter the body’s ability to maintain homeostasis, although we need to focus on cortisol – AKA the stress and fear hormone released during traumatic periods experienced by an individual.

It’s also important to note that an individual’s hippocampus, which specializes in retaining and retrieving imagery associated with memories, will shut down during trauma in order to safeguard the observer. Although the amygdala will continue functioning as it should to recognize emotions that were felt.

This unfortunately means the observer will store memories that have emotions and feelings attached to them, although imagery may or may not be included.

Thus we have an emotional flashback.

Now where does cortisol fit into the equation?

It’s the chemical that gives life the choice between running or fighting, although it can also limit the overall functionality of the hippocampus.

So what do you think would happen if your body was constantly rattled by rising corisol levels?

Well life wouldn’t be fun, that’s for sure!

Maybe that, or maybe something else entirely. Every(BODY) is different!

So now that we have that understanding, let’s take it a step further.

When animals are slaughtered, they typically release cortisol from their endocrine system (hormone system).

After all, who wants to be eaten?

Would you honestly want to be hacked to pieces before being served for Tofurkey Day?

Well maybe Tofurkey Day wouldn’t be that bad. How about a meat-based potluck?

Oh and before you’ll be served, you’ll have to be subjected to rigorous and unrelenting abuse for months if not years!

Well that’s what factory farms specialize in – that is producing a proverbial Hell on Mother Earth for any unfortunate beings privileged with being raised there.

Well the living conditions are far from natural when one considers how animals typically live their lives.

Now most of us have seen pics like the ones above, although the disconnection is rarely felt since the average person walks into a grocery store to obtain processed animals.

(these pics aren’t that graphic compared to others, although y’all can look those up if you want)

Once again, to each their own.

But just think about the quality of life those animals have with being overcrowded, locked into position, or even lacking the opportunity to explore the world at large…

Doesn’t make for a joy-filled life.

But it also doesn’t encourage those animals to grow and develop naturally and healthily.

This in turn subjects them to horrendous conditions before they ever get the chance to live their lives to the fullest.

Now some of you may be rolling your eyes as you say to yourself animals are here to fill my belly and nothing more. That’s what they were destined to accomplish in life!

Seriously though, would you want to be slaughtered and served?

Then why do they release cortisol when they’re afraid?

Why do they resist those who lead them to their untimely deaths?

And it’s a sure bet those feelings are going to land on your dinner plate the next time you sit to gorge yourself.

Once again, to each their own.

But why would you want to consume a product that will only add to the pain and suffering you’ve endured – especially when you’re trying to get over the past?

Ingesting pain when attempting to rid oneself of pain is fairly contradictory.

So that’s why it’s beneficial to eat plant and fruit based foods.

Well they don’t scream or flail limbs around as one pulls them from their roots.

I.e. cortisol isn’t released when a carrot is steamed for dinner.

Not to mention the fact that plants and fruits can be metabolized more effectively than meat – amino acid chains are harder to break. This in turn means your body has to spend LESS time and effort absorbing energy and nutrients from non-meaty foods.

Plus, your body will work to filter and cleanse itself as you eat less and less meat.

But I can’t get enough protein if I eat leafy greens!

Worry not my friend, for there are numerous alternatives 🙂

And for those who still don’t feel as though they’ll get enough from their veggie foods, this author recommends snagging some protein powder. 30% daily value with 1 scoop…

A multivitamin can further help…

It doesn’t take much to switch up one’s diet, although you’ll hear people complain I could never give up meat!

Well usually when someone says that, it means they’re addicted.

Just replace the term meat with Heroin and you’ll see what I mean.

So that’s okay – to each their own.

It’s your body, your temple, and ultimately your choice!

However, removing meat altogether from one’s diet can help them process the pains of the past.

Once again if your body isn’t focused on processing meat along with the pain suffered from the slaughtered animal, then it can direct more attention towards processing that which is holding you back.

More opportunity to heal = less time worrying about the pains of the past.

But it all starts with a choice.

Now being a meat-eater doesn’t make you a devil. In fact, you’re not the one running the factory farm even though our species only encourages such facilities to continue operating.

But once again this author is not out to shame or ridicule anyone for living.

After all, this author needs to kill plants in order to satiate his own hunger.

Gratitude should be given to those who sacrifice their lives to sustain our own.

Does that mean one needs to pray before eating their food?

Whatever floats your boat, although a simple acknowledgement will suffice.

Bless this food to heal our minds, bodies, and spirits. We thank Mother Earth, all of her inhabitants, and waters for bringing this meal to us this day. Blessed be.

Now was that so bad? Nah – shouldn’t be!

But if that’s too spiritual for ya, then at least say something like thank YOU for the meal.

The animals, workers, and materials that all came together to bring you dinner.

Because one should always acknowledge the sacrifice that was made to ensure they can continue putting one foot in front of the other.

That food doesn’t have to be there for one to eat, but it is nonetheless.

Show a little thanks 🙂

Lastly, let’s check out some tasty dishes this author has made over the past year. 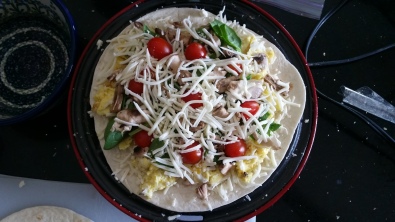 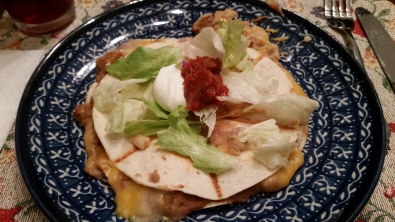 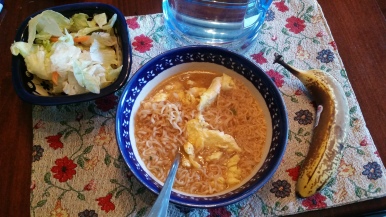 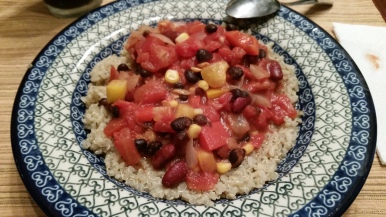 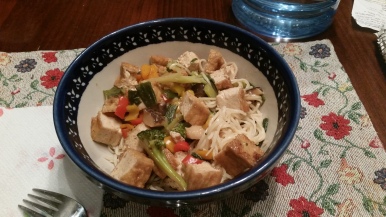 And last but not least, a Jabba the Hut pancake!