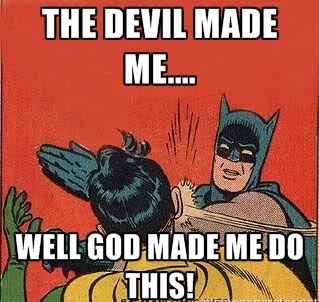 The Devil made me do it!

Keep telling yourself that to sleep better at night.

Or better yet, how about you start taking responsibility for your actions (or even inaction) as opposed to blaming the world’s problems on a spiritual boogeyman?

The devil just gets a bad rep wherever he goes, although a Satanist will see him differently than a Christian who was programmed to believe he’s as nasty as Jehova makes him out to be.

But Satan is evil!

Well that might be so, although we should at least define Evil before we go any further. After all, we need to be on the same page when it comes to topics like this.

Because it’s a sensitive one that will produce knee-jerk reactions left and right.

Yet humans are supposedly capable of higher functioning by applying reason and logic in relation to whatever situation flies their way?

Down the rabbit hole we go!

Evil is that which knowingly causes harm because it has the ability to do so. However, that which continues to cause harm even after having been asked to stop is incredibly volatile.

What makes this author such an expert in this field considering he’s not a priest, monk, or whatever guru people see nowadays?

Because he’s a monkey who was raised in darkness.

I.e. a human being who spent 23 years entwined with a malignant narcissistic mother who was mistakenly, though naturally appointed as the author’s LOVING mother who could do no harm.

Although the author in question eventually learned that he was unable to be himself.

He found that his identity was literally molded and shaped overtime in order to produce a dysfunctional momma’s boy who would eventually…well I really don’t want to go into those details.

Why? Because I love my current life and I honestly don’t want to imagine the worst possible outcome. Especially since it would have involved killing myself.

But in any case, this author will no longer digress.

He understands that no one will ever feel the pain and suffering he endured.

However, he wants the reader to know that the real demons and evil pushers in this world create Hell for the rest of humanity to endure.

What do they all have in common?

Okay, so let’s say we survived that last bit – imagine how it would feel to see the light of day, but then you only hear the words “you can’t” and “you’re less than” 24/7 to the point you excommunicate yourself from the world…

Does that sound fun?

Well that was this author’s ride (in the most abridged version he’s ever shared with the world at large) Tee hee, ha ha, ho ho, hee heeee…

Oh this author fully understands and respects the willpower your kind emanate as a predator so efficiently stalks its prey.

However, your power can fully cripple and diminish the value of those who are exposed to its toxicity for too long.

This author admits, the allure to power was fully present at a time since he was raised by a malignant narcissist – a woman who successfully contracted the professional hammer of an unsuspecting accomplice to drive the idea into a vulnerable young man how much of a potential rapist and F-up he was “destined” to become.

All from smoking some bud.

Ya’ll needed to bring it down, but that obviously didn’t happen.

So here this author sits, healing the damage that was dealt.

Ascending to his own Valhalla because Hell was too much for him to bear alone.

His story isn’t unique though.

Well this world is filled with pain and suffering – to put it bluntly.

Weed jokes aside, psychopaths and narcissists are entropic in nature because they burn everything they touch.

Does that mean they’re arsonists?

However, ya’ll should check out this slice of darkness if you’re interested.

The show is called Sword and scale – an excellent podcast that depicts the very predators this author made mention of in relation to the Joker references.

Most human beings are just trying to identify their purpose and place in the universe at large.

Some human beings ascribe to religious doctrines that anchor symbolic templates that serve to steer one along a certain spiritual path.

To each their own.

This author was shown how loving Jehova is, although this was made readily apparent through the persecution he suffered at the hands of fellow church members while growing up.

These all lead to suffering.

Not every church is holier than thou because let’s face it, humans are riddled with faults.

However, that’s not to say we lack grace!

Every soul experiences this life differently – no matter how similar the experience.

Why do you think the Joker represents what a psychopath is capable of doing without breaking a sweat?

Because archetypal patterns exist in nature for one to use as a template to overcome adversity.

Or maybe it’s to understand the situation at hand?

Maybe something else entirely…

In any case, evil wears many faces.

Although sitting around all day pointing the finger at an archetypal force is quite honestly a waste of time.

How about we start creating Heaven on Mother Earth by encouraging each and every living being to grow and develop in the manner that best suits them?

We can all help one another.

We were made from the same materials that descended from the Stars above, and thus we naturally carry a light within us that cannot be snuffed so readily.

It may get dark at times, although love is all around.

Light is here to stay.

Both now and forever.

We’ll come back to the devil another day because there’s more to discuss on a matter that is so ripe with dissent and intrigue alike.

Plus, this author has worked a long day and is ready to say goodnight.

Ladies and gents, To the Glory! Onward to Valhalla…